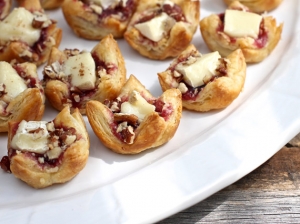 Pre-heat oven to 350. If using butter, melt butter. Cut Egg roll wrappers in half (two squares). Brush oil or butter on both sides of egg roll wrapper and sprinkle cinnamon sugar mixture on both sides. (Omit the first step to save calories, but this part does add extra flavor). Stuff egg roll wrappers into mini muffin tin pan creating a small cup, tucking in edges when necessary. Bake for 10 minutes just before turning golden brown. Meanwhile combine cinnamon, brown sugar, cranberries and nuts into a food processor and pulse until finely ground. If you do not have a food processor the nuts and cranberries can be chopped and combine with cinnamon and brown sugar, this will leave you with a coarse mixture which is fine. Cut brie into bite size pieces and set aside. Once the egg roll wrappers have begun to crisp up place brie inside the cup and top with cran-nut mix. Return to oven until the brie melts and becomes gooey, but be sure not to burn the egg roll wrappers between 5-10 min. ENJOY!!!